How Linux Works by Brian Ward¶

I have been using Linux since 2007, but I have not dived into the depths of the topic. I would like in-depth Linux Kernel knowledge, so that I can both appreciate the system better and be a more powerful developer.

The fact that I do not yet know what I would like to do is proof that I lack definitive knowledge of the system.

The Linux Kernel provides libraries and interfaces with which programs can interact with devices. Although, as this book details later, what the Kernel considers to be devices is quite interesting.

This time-sharing is perceived as multi-tasking. And it is called context switching.

Questions I have on the topic:

The Kernel runs inbetween processes during a context-switch.

The Commandments for Memory Management:

A device is typically accessible only in Kernel mode, so as to prevent improper access.

So can I think of kernel mode as what the CPU does inbetween time slices so that it can execute kernel commands? Like when a process asks to access a disk, the kernel has to respond during the context switching?

System calls (syscalls) perform specific tasks that a user process alone cannot do well or at all. Opening files, reading or writing to files, all qualify.

fork and exec are very important.

fork instructs the kernel to create a nearly identical copy of the process.

exec instructs the kernel to start a program that is passed to exec and replace the current process.

All user processes, except init start through fork. You run exec to start a new program instead of running a copy of an existing process.

Interestingly, this must be how virtualenvs cannot be sourced within a shell script. Trying: ls in a terminal, the shell calls fork to create copy of the current shell, start this, and then exit.

The user-space or userland is main memory that the kernel allocates for user processes.

A user is an entity that can run processes and own files. A user is associated with a username, but the kernel uses userids to identify a user. User space processes are owned by a user, and processes are run as a user.

root is a privileged user which can terminate any other user’s processes and read/write any file on the file system.

root might be powerful, but it still runs in User mode, not kernel mode.

Groups are sets of users.

A shell is a program that runs commands. The Bourne Shell, was developed at Bell Labs. Linux uses the Bourne-Again shell, commonly known as bash.

Use chsh to change the default shell on a Linux system.

echo does not need quotes.

cat performs concatenations on a list of files or input streams.

Unix processes use I/O streams to read and write data. Streams are very flexible: their source can be a file, a device, a terminal, or even the output stream from another process.

Using cat without an argument puts you into STDIN mode, where cat will echo back everything you type into it. When you type, you are sending inputs to STDIN. cat reads this and redirects it to STDOUT. (Use CTRL-D to exit).

CTRL-D stops STDIN input on a terminal, and depending on the program, terminates it. CTRL-C terminates a program, irrespective of the input or output.

Each process gets an STDOUT stream to write to. cat writes to STDOUT.

Both these can be redirected.

Unix directory hierarchy begins at /, called the root dir. . refers to the current diredctory. Paths can be absolute (/usr/lib) or relative (code/file1.txt or ./code/file1.txt).

The shell natively supports simple patterns, or globs. Globs are expanded before running the commands.

Use grep to find a string within a directory. Note: ripgrep (rg) and the_silver_searcher (ag) are much, much faster.

grep <find what> <find where>

Note: If you use shell expansions (globbing) in the <find what> section, these are expanded first, and might not be what you want.

diff is used to spot the differences between 2 files. diff -u provides a way for other programs to analyse the output.

file can be used to guess the file type of a given file.

locate uses a cached file index for a file, and is faster for this reason. However, if the file is newer than the index, locate won’t find it.

head and tail return the top and bottom n lines of a stream respectively. head -<n> will show <n> number of lines. tail +<n> will print everything from line number <n>.

STUFF=blah is how you assign a value to a variable in the shell. Note the absence of spaces around the :code:`=`. A shell variable is local to the current process. However, an environment variable is passed to processes spawned by this process as well.

Note that all environment variables are passed to child processes.

This creates interesting problems, such as needing to start a Python2 process from a Python3 environment. If you activate a virtualenv and use subprocess.check_output to run python, the default Python will be the same as the parent process (Python 3 here). If you have a weird use case where you would want to do this, ensure you don’t source the virtualenv, instead, run the parent python script using the absolute path to the virtual environment’s python executable (found in <envdir>/bin/python). Again, note that this is not the Python executable that was used to make the virtualenv.

PATH is a very important Environment variable. It contains a : separated list of directories where the current shell will search for commands.

This is an interesting scenario. Carefully, try export PATH=, to clear the value of PATH. Now try running commands you’ve learnt so far. If they execute, these are native unix commands. If they do not, these are binaries that were possibly available in some of the library folders such as /usr/bin, /usr/local/bin or /bin.

When appending to the path, use export PATH=$PATH:<dir>.

The default is emacs mode. Sacrilege. Turn on vi mode.

man -k <keyword> can be used when you want to search for a manual page by a keyword.

man <section> command can go to a section of a command.

info is a more detailed format for online manuals, adopted by the GNU Project.

Documentation can be sometimes found in /usr/share/doc. However, man and info do not read these.

command > file can send the output of a file to a file, clobbering (erasing) the contents of the original file. set -C can prevent clobbering in bash.

command >> file can append the output to the file.

command1 | command2 streams the stdout of command1 to the stdin of command2.

STDERR is an error stream. To redirect this, you need to use stream II by using command 2> file. To send STDERR to STDOUT, send it to the address of stream 1.

command < input will send input to the command through STDIN.

Anatomy of a UNIX Error Message¶

Errors will have the following components:

A process is a running program.

ps x: show all of your running processes.

ps ax: show all processes on the system.

ps u: include more detailed information.

A processes can be killed using a signal from the Kernel. Use the kill command to send signals. A signal is a message that the kernel sends to a process.

kill <pid> send the TERM signal to a process. This signal tells the process that it needs to quit, and gives it time for any cleanup, if needed.

kill -STOP <pid> freezes a process. This way, the process can be resumed.

kill -KILL <pid> is the most brutal way to kill a process. This will end the process without waiting for any cleanup.

Shells also support Job Control, a way to send TSTP (similar to STOP) to a running process in the foreground using ^Z, and CONT using the fg (bring to foreground) or bg (continue in background) commands.

screen and tmux are good choices of programs to send noninteractive programs to the background.

Send any command directly to the background by suffixing the command with & before running it.

Note that when sending a process to the background, it is always preferred to ensure that the stdout and stdin are remapped.

Every Unix file has a set of permissions that determine whether a user can read, write, or run that file. Use ls -l to view this information.

The mode, the first string, represents the file’s permissions and some extra information. 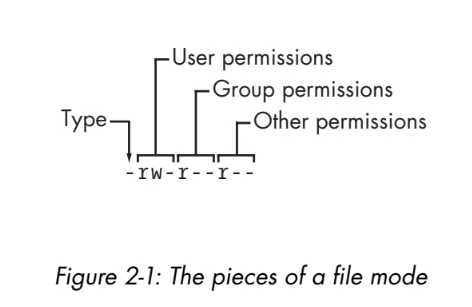 The file type indicates what this is. - indicates a regular file. d indicates a directory. There are other types which will come up later.

The rest of it can be summed up as groups of 3: [rwx], using - where inapplicable. The permission bits indicate what rights the user(s) in question has. The first set is the owner, the second is the group members, the third group is everyone else.

chmod a+r <file> will give everyone read permissions on the file.

chmod o+r <file> will give other users (not owner and not group members) read permissions on the file.

chmod +rwx <file> will give the user all permissions on the file.

chmod g+rx <file> will give the group members read and execute permissions on the file.

chmod o-r <file> will remove read access from other users.

Although you can use numbers to set the direct permissions, this is much easier to read.

This is a work in progress.